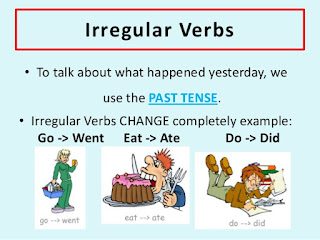 You will need to know all of the irregular verbs from Chapters 8 & 9 for the test on Wednesday.  I have created a Quizlet for you to practice.  There are six activities you can do to practice your verbs.
Posted by Denise at Sunday, March 26, 2017 9 comments: 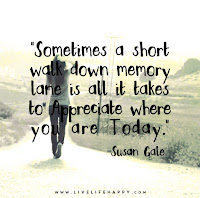 You will be writing a 10-year composition which will require you to look at your life 10 years ago, where it currently is, and where you imagine it will be in 10 years.

For this unit, we will:

Below are some past, present, and future verbs which

will be useful for your essay.

There are many was to describe past action in English.
1.  The simple past tense is used to describe an action, state, or event that was completed at some time in the past.

The simple present tense in English is used to describe an action that is regular, true or normal.
We use the present tense:
1. For repeated or regular actions in the present time period.
2. For facts.
3. For habits.
4. For things that are always / generally true.
5.  The present perfect is used to talk about completed events and actions which occurred during a time in the past which is not finished.

1.  The future progressive is used to describe action that be be happening at some point in the future. 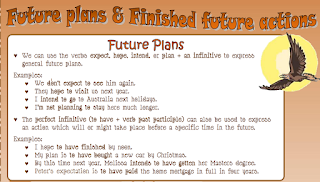 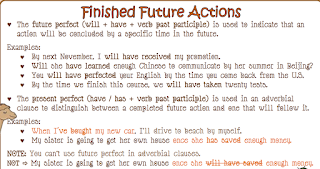 Those Little Words...A, An, and The

My daughter wants to buy a dog this weekend. (Indefinite-Could be any dog)The dog in the backyard is very cute.(Definite-The one in the backyard) He requested a puppy for his birthday.He wanted the puppy he played with at the pet shop.She ordered a hamburger without onions.Did you drink the coke I just ordered? Plural count nouns:

Use "the" or nothing.He has experience. (if indefinite or mentioned for the first time)He has the experience necessary for the job. (if definite or mentioned before)The medicine the doctor prescribed had unpleasant side effects.Writing in a second language is especially challenging.Have you studied the history of South Africa?History reminds us that events repeat themselves.Definite Article THE Rules

When referring to a group of people by use of an adjective rather than a noun, use "the".  Names of Countries

Some countries are preceded by "the", usually if the name is plural, contains an adjective, or includes "of".

Rivers, Oceans, Seas, Groups of Mountains & Islands use "the"

When referring to an activity, use nothing I am going to school now.(activity-study) He is always on time for class. (activity-learn)When referring to the location, use "the" The meeting is at the school. (location-campus)They are remodeling the movie theater. (location-building)The new student had trouble finding the class. (location-classroom)

Unique Objects - Use THE

Part of a larger group, Use THE


Please watch the video on SOAP Notes and take notes on the handout I gave you in class.
Posted by Denise at Friday, March 03, 2017 2 comments:

Making Offers and Requests
It is common that English speakers make offers in conversations in order to be polite and helpful. When they do so they use these expressions:
Can I… ?Shall I… ?Would you like … ?How about …?
English learner must be able to make offers as well as accept or reject them. The following are useful expressions to do so.